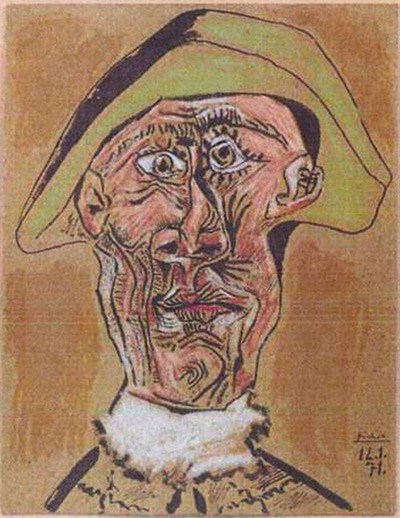 These past two days it has become clear that the fake Tête d’Arlequin painting – discovered in Romania last Saturday by Ms Feticu and Mr Westerman – was left on the premises by BERLIN. This was not intended as a publicity stunt but as an essential part of a theatre performance called True Copy, which premiered last Thursday at deSingel in Antwerp (BE). In True Copy, BERLIN merges different worlds and realities on stage, revolving around one protagonist: Dutch master forger Geert Jan Jansen. The idea is to draw attention to a number of sore points within the art trade. BERLIN invariably links special, personal stories – like the one from Geert Jan Jansen – to universal themes in its shows, with non-fiction often flowing seamlessly into fiction.

On Tuesday October 31st, we buried the Tête d’Arlequin. On Wednesday November 1st, we sent out six anonymous letters with a location and instructions, in the hope the work would be found quickly and authenticated as the real Tête d’Arlequin. Three of the letters were sent to Romanian addresses, the other three to Dutch addresses. It seemed logical that one of the three Romanian contacts would dig up the work first. The Dutch addresses were, in fact, a back-up plan. If no action was undertaken in Romania, the Dutch letters would arrive seven days later. Which was indeed the case. We then assumed that the Dutch contacts would notify the Romanian or Dutch authorities.
Ms Feticu and Mr Westerman, however, took a plane to Romania and the outcome is known. We were surprised at the speed with which the discovery made the press, even before the work’s authenticity had been verified.

The purpose of our intervention was to show how the Tête d’Arlequin could find its way back into the original Triton Collection, from which it was stolen in 2012. We never assumed this would be easy, but wanted to find out at which point in the process things would falter, with whom and why. The work is one of the storylines of a performance, which as a whole focuses on the value of truth. What is real and what is not?

We have been briefly in touch with Mr Westerman over the phone and are willing to meet in person, albeit away from the media. The whole construction fits into a performance and is not intended as a publicity stunt, as has been suggested by the media. That is why we have decided not to seek the spotlights and to abstain from making any further comments or giving interviews in the press.